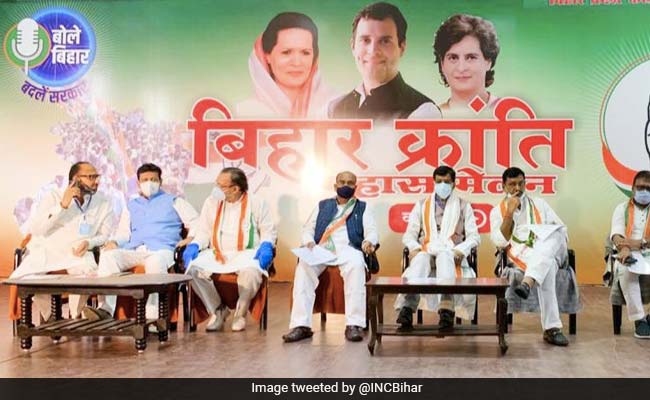 Congress is a part of the opposition Grand Alliance in the state headed by the RJD.

The Congress on Monday launched its campaign for the Bihar polls by organising a virtual meeting in the two districts of East Champaran and West Champaran to reach out to people ahead of the elections due in October- November.

The party decided to carry out “Bihar Kranti Virtual Mahasammelan” (virtual mega-conference) keeping in mind the COVID-19 pandemic and the election commissions guidelines for holding such rallies, party sources said.

Similar digital meetings will be held assembly constituency-wise in every district in two phases, they said.

Congress national general secretary and MP Avinash Pandey, while addressing the virtual rally from New Delhi, said that Bihar is all set for a change of government as people are fed up with the NDA rule in the state.

Congress is a part of the opposition Grand Alliance in the state headed by the RJD.

Farmers, students, women, labourers are a harried lot, Pandey said, adding the government has turned a deaf ear to the problems being faced by people especially towards rising crime graph in the state, Pandey said.

Pandey, who is also Bihar Congress Screening Committee chairman, said though people in power were making tall claims but no sign of development is visible in the state.

National Secretary and Bihar co-in-charge Ajay Kapoor also addressed the virtual conference from the national capital in the two districts which were attended by party workers and the locals.

After holding 100 such virtual meetings in the state, the party will be holding a state-level conference through virtual mode which will be addressed by former Congress president Rahul Gandhi.

“The pious land of Bihar is not going to tolerate atrocities any extra and can throw out the present dispensation at any price”, Ajay Kapoor said.

In his presidential address, Bihar Congress chief Madan Mohan Jha said that people had voted for Grand Alliance five years ago but Nitish Kumar switched sides by ditching the mandate.

People have been deceived by the NDA government, he said asserting that “we sounded a bugle for change with the launch of Bihar Kranti Virtual Mahasammelan”.

Congress was part of the coalition government in 2015 along with JD(U) and RJD.

The digital meet shall be held at Sheohar and later at Sitamarhi Tuesday, Rajesh Rathor mentioned.

How a Staffing Agency Can Help Augment Your Hiring Capability

A gifted workforce is the best asset for an organisation to scale shortly. While the proper candidate in your organization could make all of...
Read more

The accused individuals within the latest Delhi riots allegedly dedicated a “crime against humanity” carried out in...
Read more