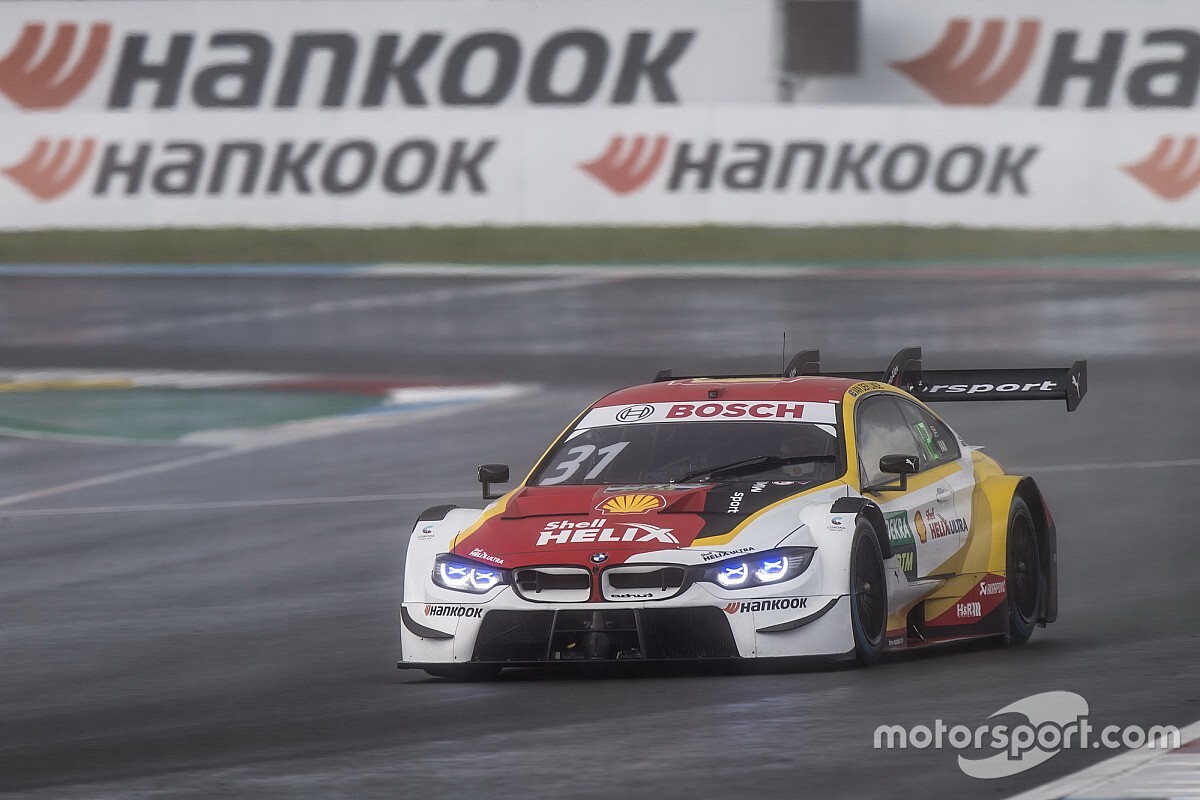 Van der Linde made a promising begin to his DTM profession final 12 months, scoring factors regularly and even ending fifth in solely his second weekend at Zolder – regardless of BMW’s apparent drawback to Audi in the beginning of the Class One period.

But the South African actually got here to the fore in the beginning of the 2020 season as he established himself as the highest BMW driver within the opening spherical at Spa-Francorchamps. That was adopted by a charging drive to second at Lausitzring, opening up the Bavarian producer’s podium account for the brand new marketing campaign.

However, as van der Linde himself admitted, profitable the race was “the last thing on my mind” when he lined up 14th on the grid for the second race on a humid Assen circuit. BMW had struggled to match Audi on one-lap tempo on the Dutch venue, with the marque’s prime qualifier Jonathan Aberdein lapping 4 tenths slower than polesitter Rene Rast in sixth.

Van der Linde made little progress within the opening levels of the race and was working down in thirteenth place, seemingly on his technique to a disappointing non-points end.

But BMW elected to carry him into the pits for contemporary moist tyres on lap 10 of 31, which turned out to be decisive in him claiming a shock victory in entrance of a restricted Dutch crowd.

Even although race chief Robin Frijns was working in clear air with a 10-second benefit up entrance, van der Linde was capable of lap two-to-three seconds faster on brisker tyres.

Van der Linde’s tempo would haven’t been ignored by Audi, particularly after Lucas Auer and Timo Glock staged an identical undercut on the Lausitzring to say a 1-2 end for BMW. But given van der Linde was thus far again, few would have anticipated the South African to leapfrog the race leaders after which maintain on for victory.

When Frijns lastly made his pitstop on lap 22, he emerged a couple of seconds behind van der Linde, who assumed the race lead for the primary time.

Had the remainder of the race been run in regular circumstances, Frijns and teammate Nico Muller may have pressurised the BMW driver for the race lead and certain handed him.

But Fabio Scherer crashed his WRT Audi closely on slick tyres on lap 23, necessitating first a security automobile after which a purple flag. The stoppage allowed all drivers together with van der Linde to alter to contemporary tyres, negating any drawback the BMW driver could have had.

The race resumed with a handful of minutes on the clock and van der Linde managed to do a powerful job of protecting the Abt Audi duo behind, scoring his maiden victory within the DTM – and the second for BMW in 2020.

“I was a great race, I’m just super happy now,” van der Linde stated within the press convention. “I really don’t have a lot of words to explain how great it feels.

“We started on P14 and that was probably the last thing that went through my mind. For some reason I was really calm on the grid, I knew what I had to do. The car was mega. Really felt comfortable pushing towards the limit and Assen is a great track to explore the limits.

“It was not easy, especially with Robin and Nico behind me. We know how to drive a race car and restart was really tricky and I was sitting in red flag for quite long and just thinking, a lot of thoughts going through my head what could happen. In the end we did it.”

While the purple flag actually performed into the arms of van der Linde, the 21-year-old felt he could have hung onto victory even within the absence of it.

“Yeah, I think without the red flag we still had a very good chance,” he stated. “We were quite far ahead of Robin. The tyres still felt pretty good and I only had 13 or 12 minutes left to race.

“For me the red flag was actually quite worrying because I knew everyone would close the gap to me and I had like a six-second lead or whatever at that point.

“So it was bit disappointing when I saw Fabio Scherer in the wall and the red flag announced. But in the end we managed it super-well. I’m just happy we got a good restart and we managed to stay at the front.”

Muller, nevertheless, disagreed with van der Linde’s views, believing each he and Frijns may have handed him with the form of tyre benefit that they had previous to Scherer’s incident.

“If only there was a safety car which backed the field up, I think Robin and myself would have been clearly in better shape,” he stated. “I’m pretty sure we would have passed him, but would have, could have, it’s easy to say afterwards.

“I think without the red flag, let’s say a normal race, it would have been a fight for the win between Robin and myself, I’m pretty sure.

“Not to take credit away, Sheldon did a very good job. Last part of the race after the red flag. He still had to manage switching on those new tyres and he did that perfectly. Still yeah, congratulations. Credit to that, I don’t want to take anything away [from him].”

In what comes as a particularly private disclosure from a high-profile British royal, Britan's Duchess of Sussex...
Read more